CoCalc is a modern web-application, but there are many already existing desktop applications. This aspect of CoCalc brings such applications to the web, by running them inside a minimal graphical environment and presenting them to you via the browser. It is even possible to collaboratively work on the same application – although be warned that this is quite confusing!

See this blog post for more screenshot and further explanations. 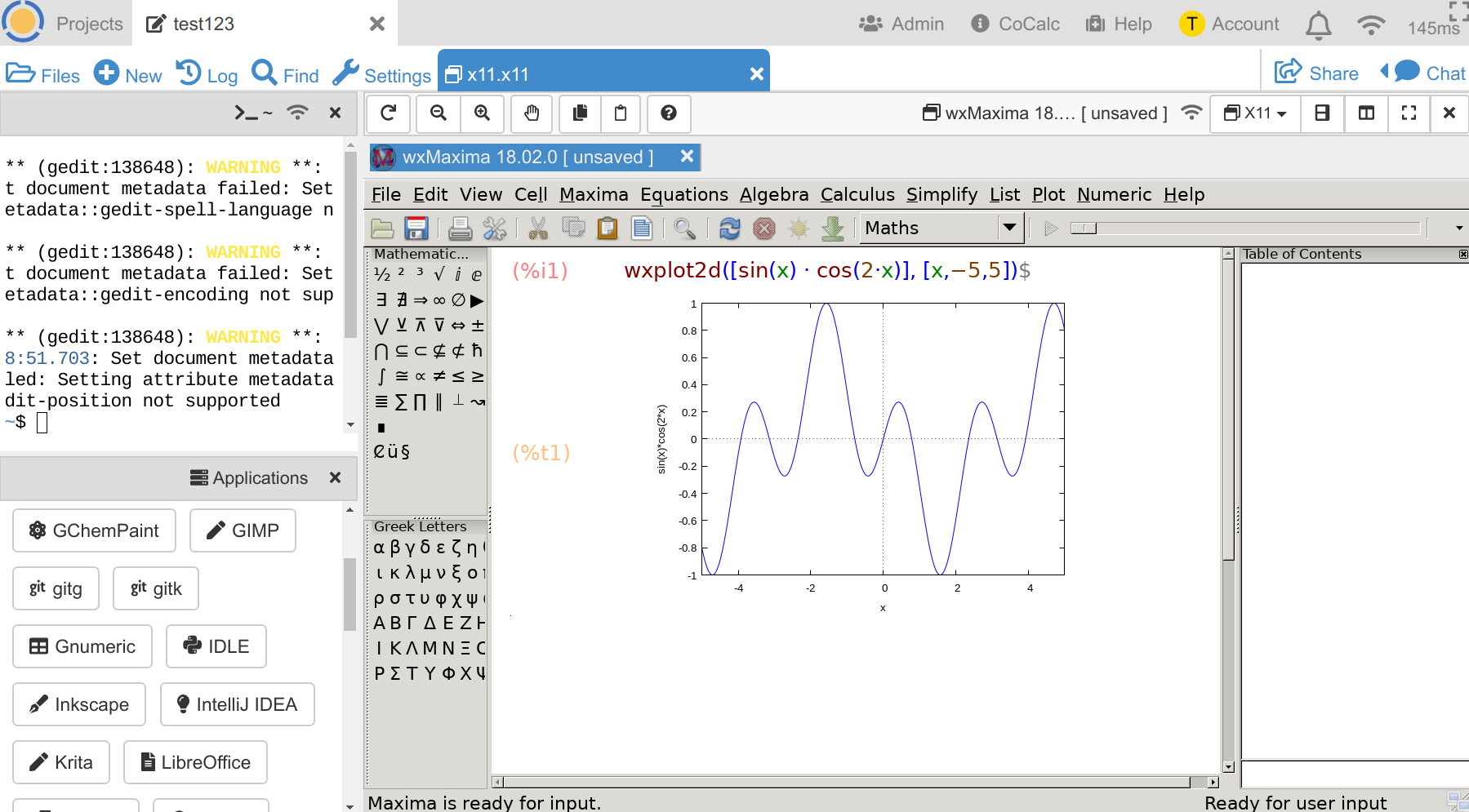 In your project, create an X11 Desktop-file (which has the ending *.x11), or use the corresponding button when creating a new file. You should see a split frame editor with

Initially, that X11 area is empty and you have to start an application. To get started, we suggest to launch a simple text editor like Gedit or LibreOffice Writer.

You need to click once on the X11 window in order to focus it. This tells it to process any input (mouse clicks, keyboard characters, …)

In the screenshot below, you can see that gedit was typed into the Linux Terminal. After hitting the return key, the application was launched and the window is shown. The characters “asdf” were typed in and then the “Save”-Button at the top right inside the Gedit windows was pressed. This opened up an overlay dialog window. There, type in the filename and click “Save” at the bottom again. 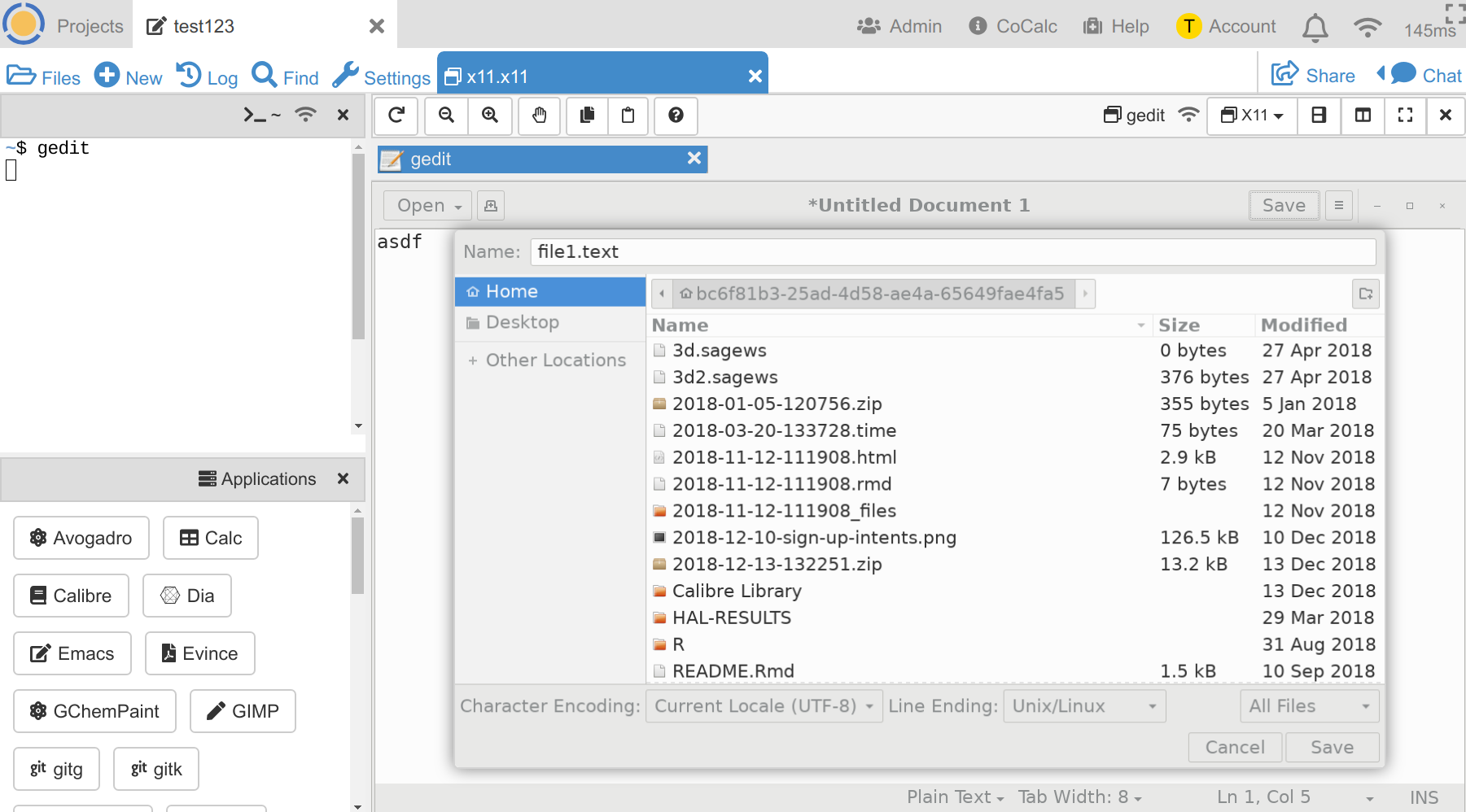 Afterwards, this did create a file named file1.txt in the current directory. Go ahead and open it up inside of CoCalc!

Modal dialogs open up as almost-maximized windows on top of the current window of the application.

An overlay dialog window without a Close, Ok, or Cancel button can be closed by clicking on the application visible in the background; i.e. the surrounding area of the dialog. 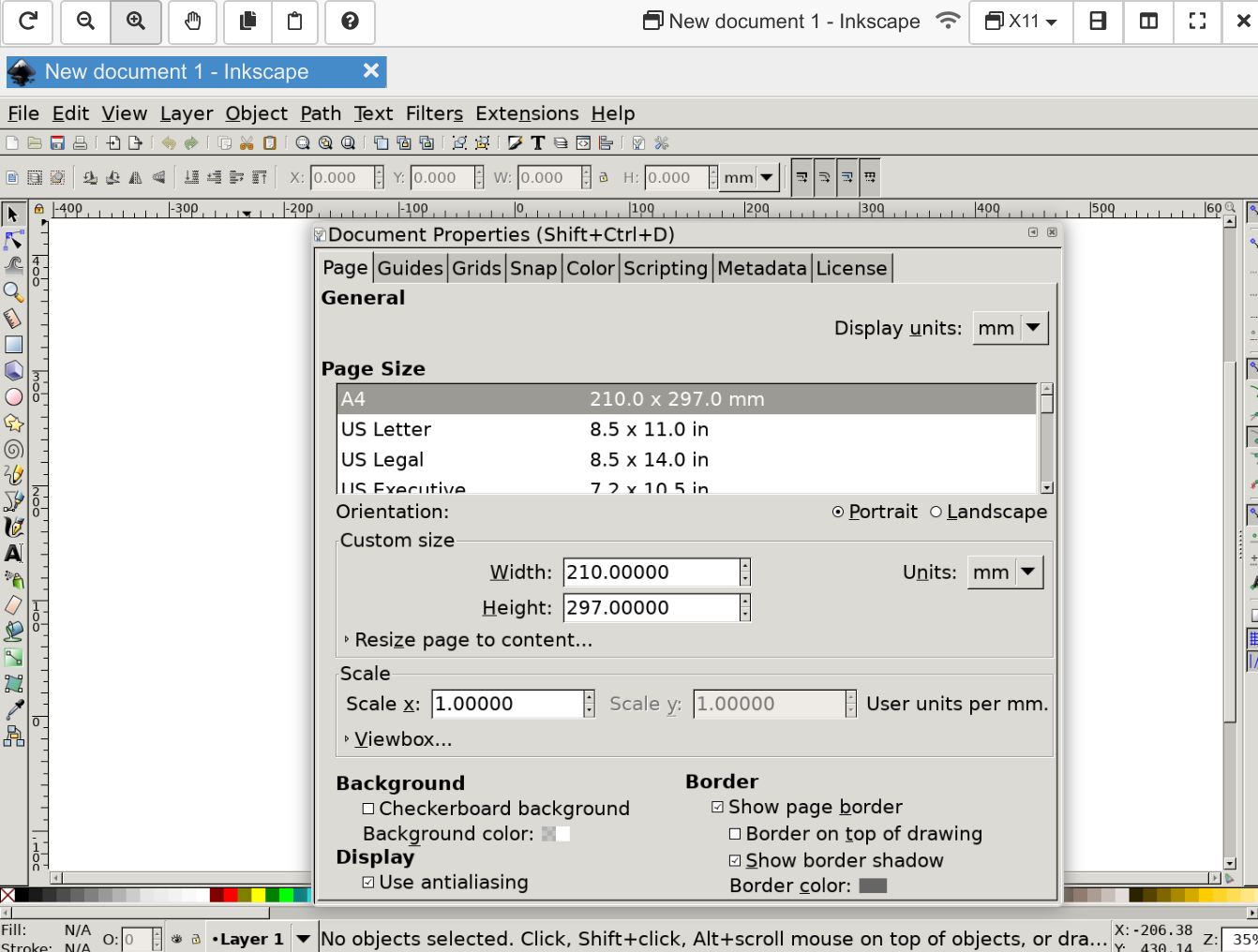 When you open up multiple applications (or a single application opens multiple windows), they appear as tabs at the top of the X11 view area. In the screenshot below, you can see that the text file was also opened up in LibreOffice Writer: 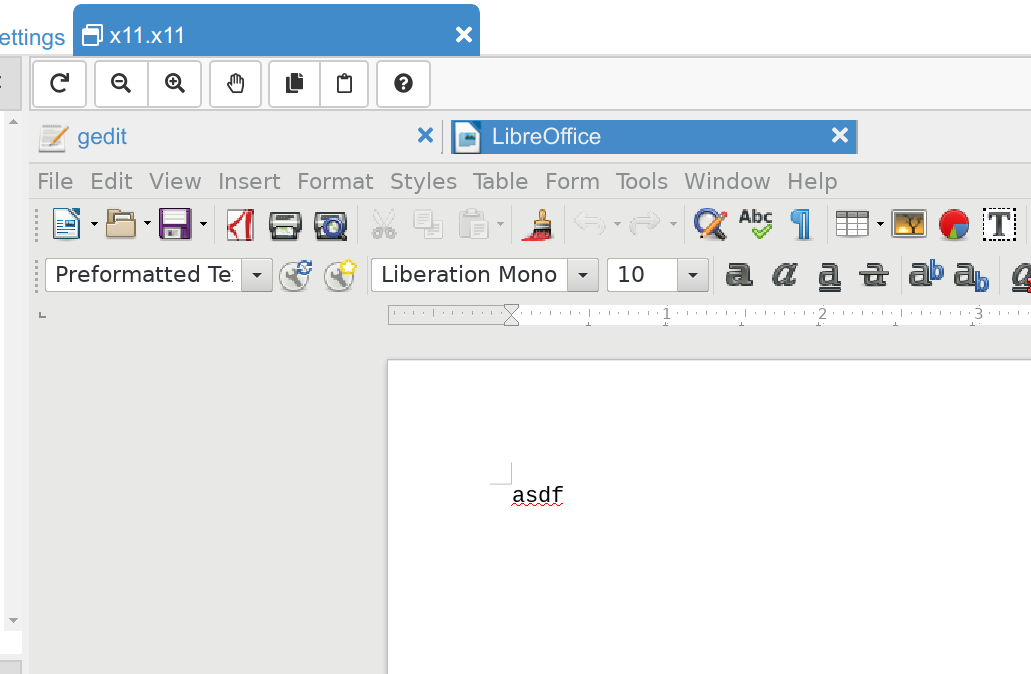 Sometimes, applications open up additional dialog windows, which show up as tabs at the top. In order to respond to the application’s dialog window, you have to click on the appropriate tab to open it up and take appropriate actions. (e.g. confirming a certain operation, etc.)

Many languages like “German” will only work well with the variant “no dead keys”.

CoCalc tries to match its virtual desktop size to the size of the frame inside your browser window. It will also calculate an appropriate zoom level based on the resolution of your screen. However, this might not always work.

At the top of the X11 area are zoom controls, which allow you to change the resolution. Sometimes, it might also be necessary to change some settings within the application itself (some zoom related ones in its preferences), or to change the size of the panel or browser window itself. CoCalc dynamically resizes the desktop and the application will redraw accordingly.

Inside the small Linux Terminal on the side, you can run programs or your own scripts. For example, this could be a Python script, or even a full application: try this matplotlib: Embedding In Wx5 example.

Behind the scenes, after the X11 environment starts up, the $DISPLAY variable is set to tell the application where to show the graphical window. Please wait until it is initialized, which you can see after the connection indicator at the top right next to “X11” vanishes. Otherwise, you’ll get this error message Unable to access the X Display, is $DISPLAY set properly?.

Example script (you can also run it interactively in an ipython3 shell):

Unless otherwise noted, the application’s name is also the command to start the executable. For most applications you can find a launcher button:

You can use RStudio in CoCalc by doing +New -> X11 Desktop, then clicking the “RStudio” button at the bottom left and waiting 20 seconds. If you need faster response time for R calculations, you might consider the following alternatives to RStudio:

You can also use R in CoCalc via:

If the visible buttons/controls are small, especially if you have a high-res display, and zooming alone doesn’t really help much, enable HDPI rendering. That’s available for some of the applications in their respective configuration dialogs.

Spyder: The “auto high DPI scaling” setting is in Preferences, accessible via the Tools menu or the wrench-icon. See screenshot below: 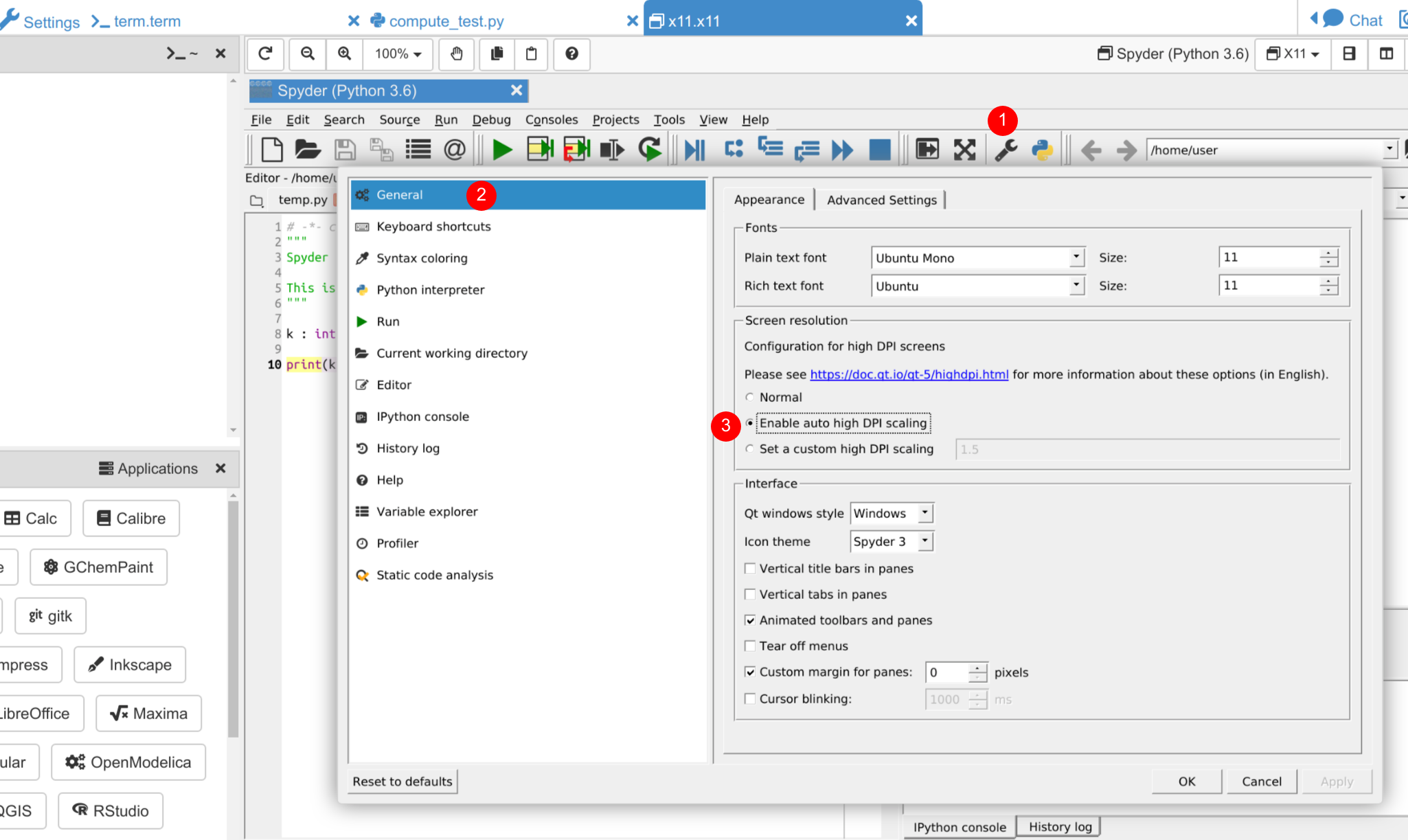 In theory, Scilab should work in this Graphical Applications editor, but there is a long standing issue in Ubuntu Linux about this. 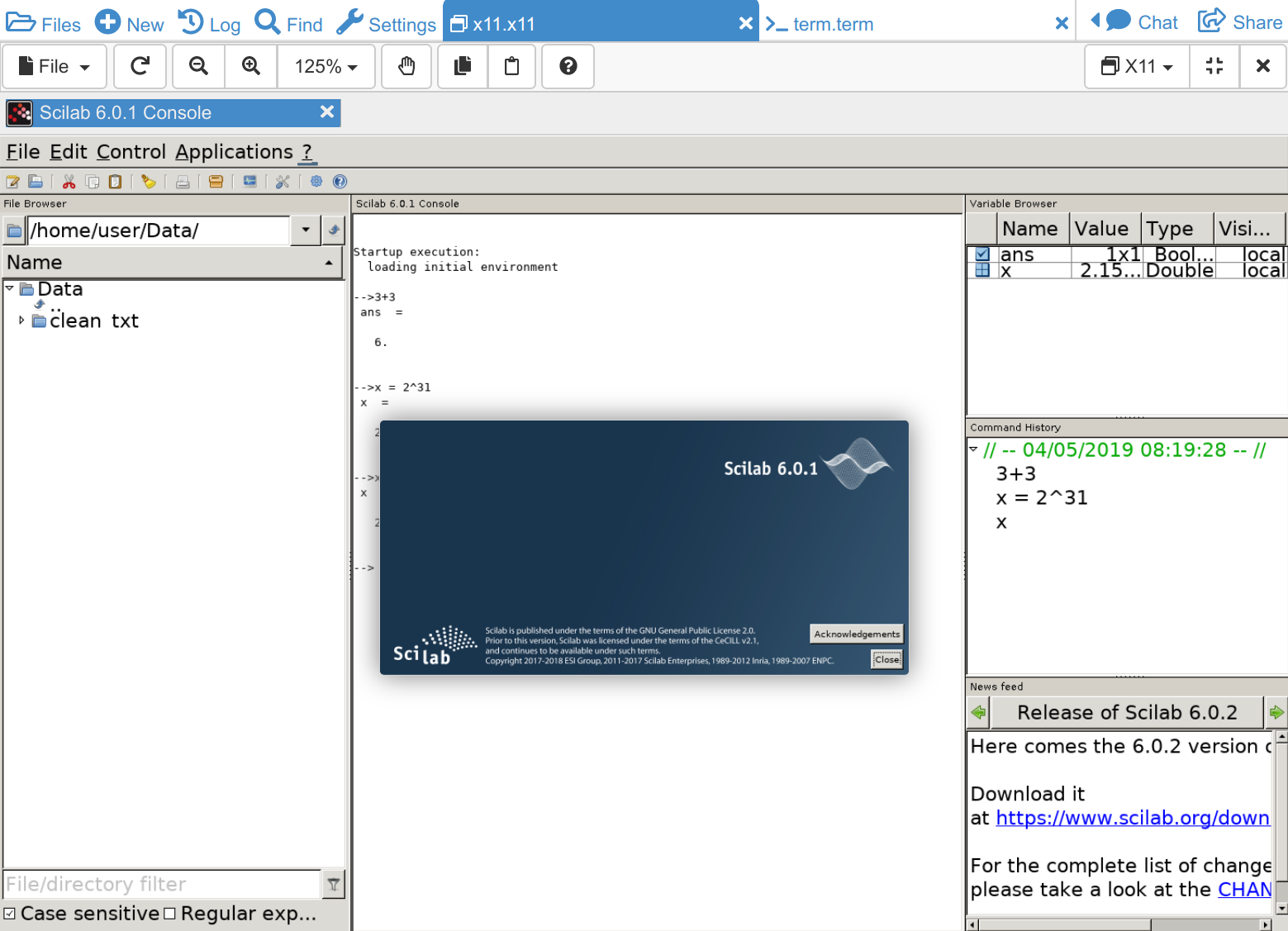