Markdown makes it easy to add basic structure, such as headings and lists, to a plaintext document. Use of Markdown is ubiquitous in CoCalc (see below). When you start making notes into a text file, it is often most convenient to open the file as a Markdown document, i.e. a file with name ending in “.md”. It is easy to produce pdf and html files from markdown.

There is a brief tutorial on Markdown in the Project Library. To copy the introduction into a project of yours, open the project and follow the four steps below: 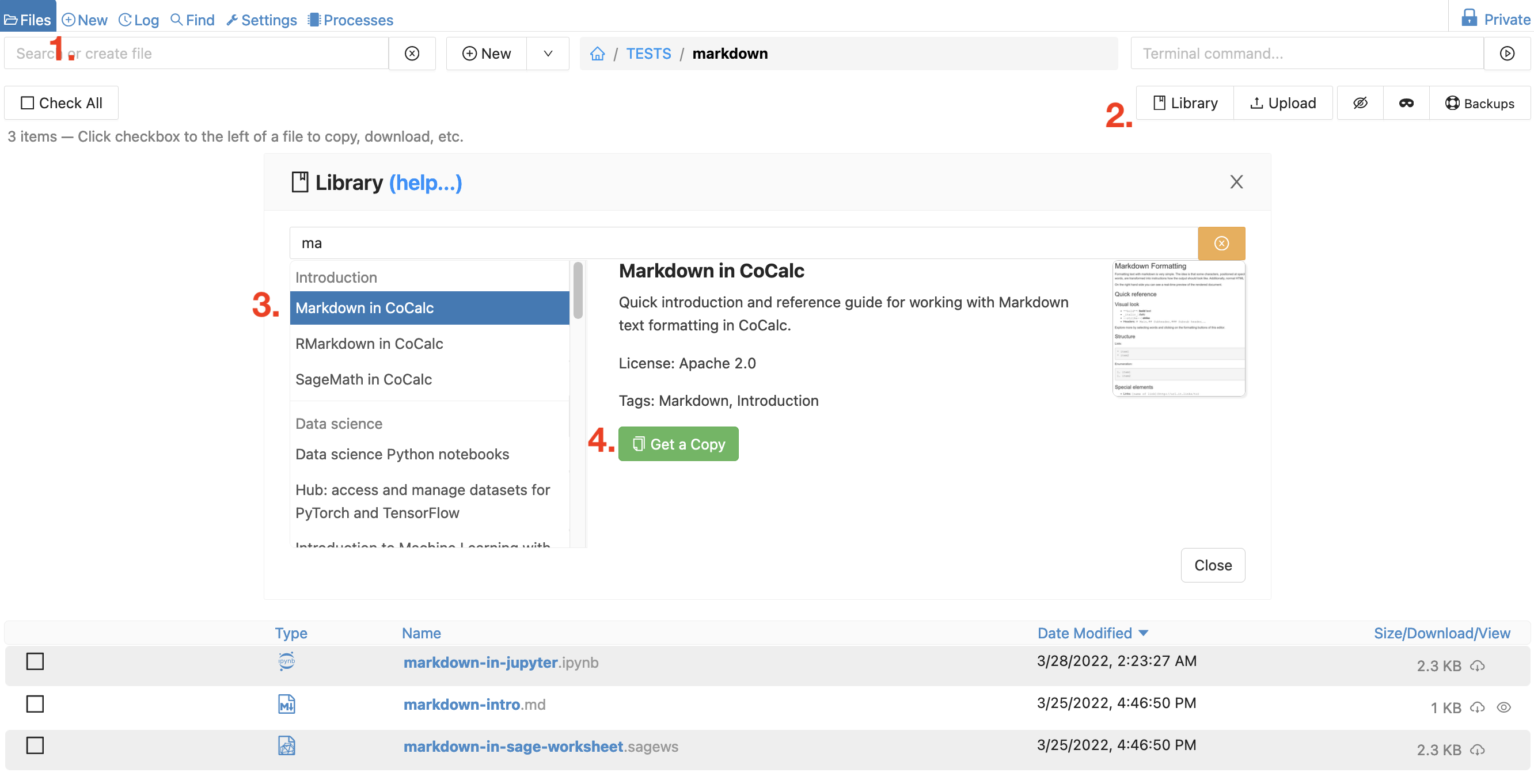 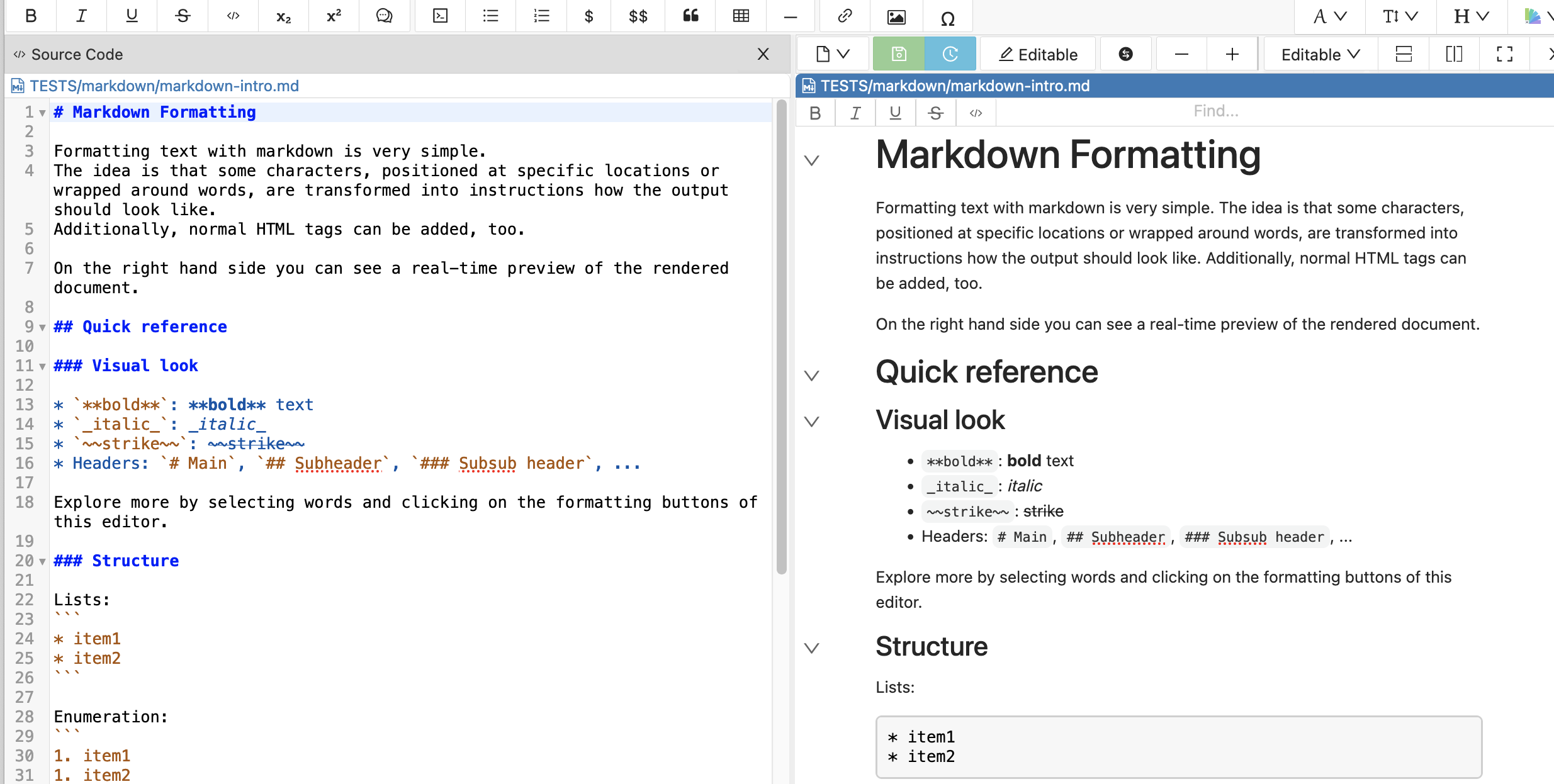 You can find additional information about variations of markdown relevant to CoCalc at the following links:

Where Markdown can be used in CoCalc

Type ” [ ] ” to create an unchecked checkbox. Note the single space between the square brackets. Type ” [x] ” to create a checked box. In both unchecked and checked boxes, there is a space before the first bracket and a space after the closed bracket.

Multiple users can edit CoCalc Markdown at the same time. In fact, one user can have several browser windows open to the same Markdown content and edit from them all simultaneously (we sometimes use this feature to test collaboration while developing CoCalc).

View the list of supported emojis in the markdown-it-emojis GitHub repository.

Precede a word with a hash sign (“#”) and it is formatted to stand out as a hashtag.

The markdown editor supports inverse search when source and rendered views are both visible (this is the default display for markdown files). If you double-click on markdown in the rendered view, the source view will scroll to display the corresponding line.

If you are using a split view with Markdown Code in one pane and Editable Text in the other, you can use the sync button:

at the top from either pane to synchronize the cursor in the other pane.

CoCalc will gather hyperlinks in a References section at the bottom of the file if you use either of the following formats to enter hyperlinks while in Markdown code edit mode. The input format for reference links follows the specification here, markdown reference links (with the enhancement that with implicit link names, an empty pair of brackets is not needed).

Implicit link name. In the body of your document, enclose the text reference to the link in square brackets. Then include a definition of the link on a separate line. You may append an optional title string, surrounded by single or double quotes, to the definition. The definition does not have to be next to the reference; for example, you could gather definitions at the bottom of your document. Here is an example of a link reference line and a corresponding definition line:

Link id. Here’s another example of a link reference line followed by the corresponding definition. In this case the link id is numeric:

CoCalc will create the following References section at the bottom of the markdown file from the sample links above.

CoCalc uses markdown-it, with plug-ins and some customizations. Details are in the CoCalc source code at GitHub in file src/packages/frontend/markdown/index.ts.

CoCalc markdown is parsed using markdown-it with the linkify and html options set to true, so that patterns that look like URL’s are clickable and html blocks and fragments are parsed as html, according to the commonmark spec (which can be weird, subtle, and surprising). CoCalc’s markdown is also parsed with the following five plugins enabled. Except for the emoji plugin, these are all forks of upstreams plugins:

CoCalc’s markdown is only parsed using markdown-it. It is rendered using a custom React-based renderer that is built around slatejs, which we also use for direct rich text editing of markdown. Thus rendering is much more rigid and structured than most markdown renderers, which simply export an html string and let the browser interpret it. For example, rendering of code blocks (triple back ticks) is accomplished using CodeMirror’s parser and react to provide syntax highlighting for any mode we support. The html blocks are rendered using html-react-parser, so they will only work if they are valid complete html; moreover, in context like the share server or untrusted notebooks, where the HTML shouldn’t be trusted, our markdown renderer sanitizes the html using the xss module.