CoCalc’s support for multi-file documents is now available. Here’s a summary of features:

See the section LaTeX/Modular Documents in the WikiBooks LaTeX book for a helpful introduction to working with multiple files in LaTeX.

Forward and inverse search are extremely helpful for navigating in a larger document.

Forward: place your cursor at a specific location in the editor on the left-hand side. Click the “Forward” button or the [ALT] + [Return] keyboard shortcut to jump to the corresponding location in the PDF preview. (In rare cases where full positional information is not available, this feature may not be active.)

Inverse: Double-click on an area of interest in the PDF Preview area. The cursor in the text editor will jump to the paragraph in the source-code.

Spell checking during LaTeX editing is available for several languages. You can enable/disable Spellcheck and change the language for a particular file by opening the Settings frame as shown:

Note that the Spellcheck feature is also available in Markdown and HTML editors.

CoCalc can show you current word count statistics generated by texcount. In order to see them, change one of the frames or created a new one in the Frame editor. Select “Word Count” as shown below: 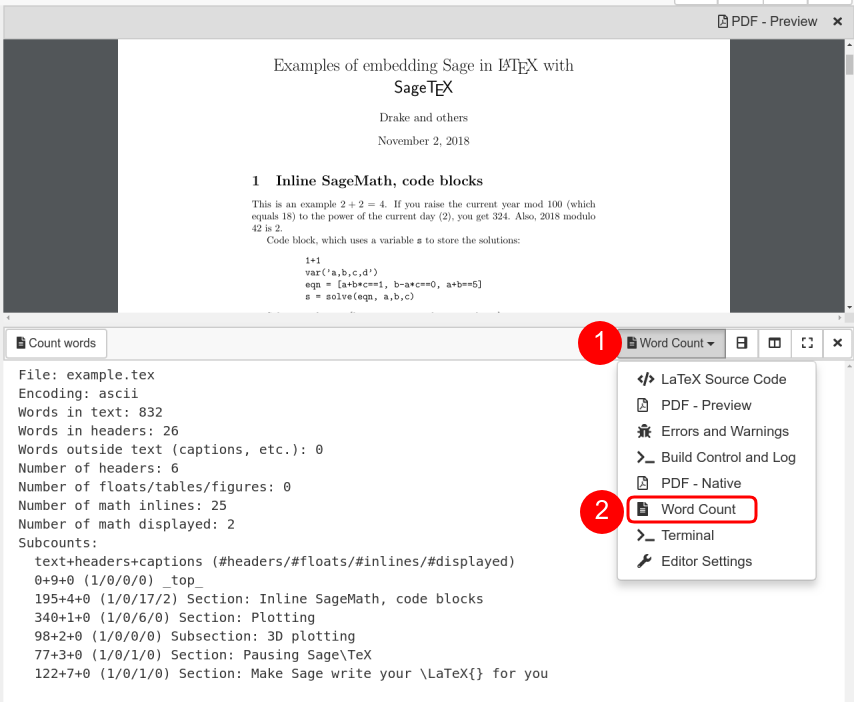 In the build panel, you can use the “Engine” dropdown menu to select a supported LaTeX engine. This replaces the current build command with a generic one, that’s know to work well in many situations! These options are available:

By default, an -output-directory=... is set, such that your current directory is kept clean of temporary files. Instead, the actual build process happens in a temporary in-memory directory.

Some packages do not work under these circumstances, hence there are (no bulid dir) variants, which do not set a temporary output directory flag.

Bring your own command

More general, you can also specify your own build command. To avoid any processing of your build command, append a “;” semicolon at the end of your command or even specify several commands separated by semicolons. You could also use GNU Makefiles and call make ...; from here.

The selected build command is stored in a companion file in the project. You can also store the default engine or even hardcode the build command in the LaTeX document itself. There are two relevant directives, which are special comment lines at the beginning of your file.

UTF8: the build process runs in a Linux environment. All edited documents are assumed to be encoded as UTF-8. Therefore, depending if you compile via PDFLaTeX or XeLaTeX, the following encoding definitions are the preferred choices:

The default template already selects the correct configuration for you.